Ghospitable Lithuania: Spooky Places Where Spirits Wander All Year Round

Lithuania introduces some of its spookiest stories of centuries-old manors and castles where a Halloween-like atmosphere is alive all year round.

While countries around the world are searching for ways to safely celebrate Halloween 2020, Lithuania has no such worries. In fact, some of the country's traditions and locally-told tales are already so ghospitable that despite the global pandemic scaring away the spookiest season, Lithuanians seem to enjoy the company of devils, witches and spirits all year round.

Interestingly enough, the Halloween-like atmosphere can be just as easily found among almost six hundred manors and several dozen more castles in the country. Up to this day many of them are wrapped in exclusive ghospitable stories about a duchess bricked away in the tower, secret room of mirrors and other spooky tales.

“It is that unique combination of both—buildings that stand tall and mighty and stories they carry up to this day—that makes any old premises so attractive to explore,” says Dmitrijus, the professional Urban Explorer in Lithuania and founder of project Pamirsta.lt (Forgotten). “And once you stop for a moment to think they were once a gathering place for people of science, culture and nobility, some of these now seemingly empty and insignificant buildings unfold in entirely different colors, as if something truly unexpected gets discovered with every new historical detail learned.”

Here are some of the spookiest stories of centuries-old manors and castles in Lithuania to raise some good old-fashioned goosebumps on the skin. They offer tours for visitors, local events, exhibitions or are abandoned yet freely accessible for the general public.

Commonly known as the Pearl of Sudovia region, Paežeriai Manor is wrapped in stories about an innocent white maiden, the victim of a tragically-ended love. The legend goes back to the 19th century, when secret affection between the wealthy landlord Zigmantas Gauronskis and a young maid flourished—until she was due to have his child. To avoid a conflict with his wife, the landlord sent the young woman away to another manor. However, unable to cope with a broken heart, the maid came back, left the newborn at the front door and took her life in a nearby lake. People say that even today her soul struggles to find peace—it wanders around the manor at night, while in the mornings, a white shadow can be seen in the park.

Stories of forbidden love are also told in about half-a-thousand-year-old Siesikai Castle, located near the city of Ukmergė. According to the old tales, a young wife of one of the Daumantai dukes fell deeply in love with a knight from a foreign country. At night, she would escape from the castle and rush to secret dates by Lake Siesikai. Once the duke learned about infidelity, he ruthlessly sentenced his wife to be bricked away and trapped in the tower walls until the end of her life. Locals say you can still see the duchess walking by the lake at night and waiting for her beloved knight.

A few years ago Villa Anapilis (Afterlife) was fully restored for the public use, yet it still fires the imagination with its ghostly past. According to the legend of the resort town Palanga, this villa was named after a spooky hobby of countess Sofija Tiškevičienė—summoning ghosts into the house. As the story goes, the lady had even built a secret room of mirrors, where summoned spirits could no longer return to their world. After her death, the ghost of hers was spotted wandering in the house, and one can still hear a wind organ emanating from the house—the sound that helped countess Sofija calm down whenever her poor health had gotten worse. 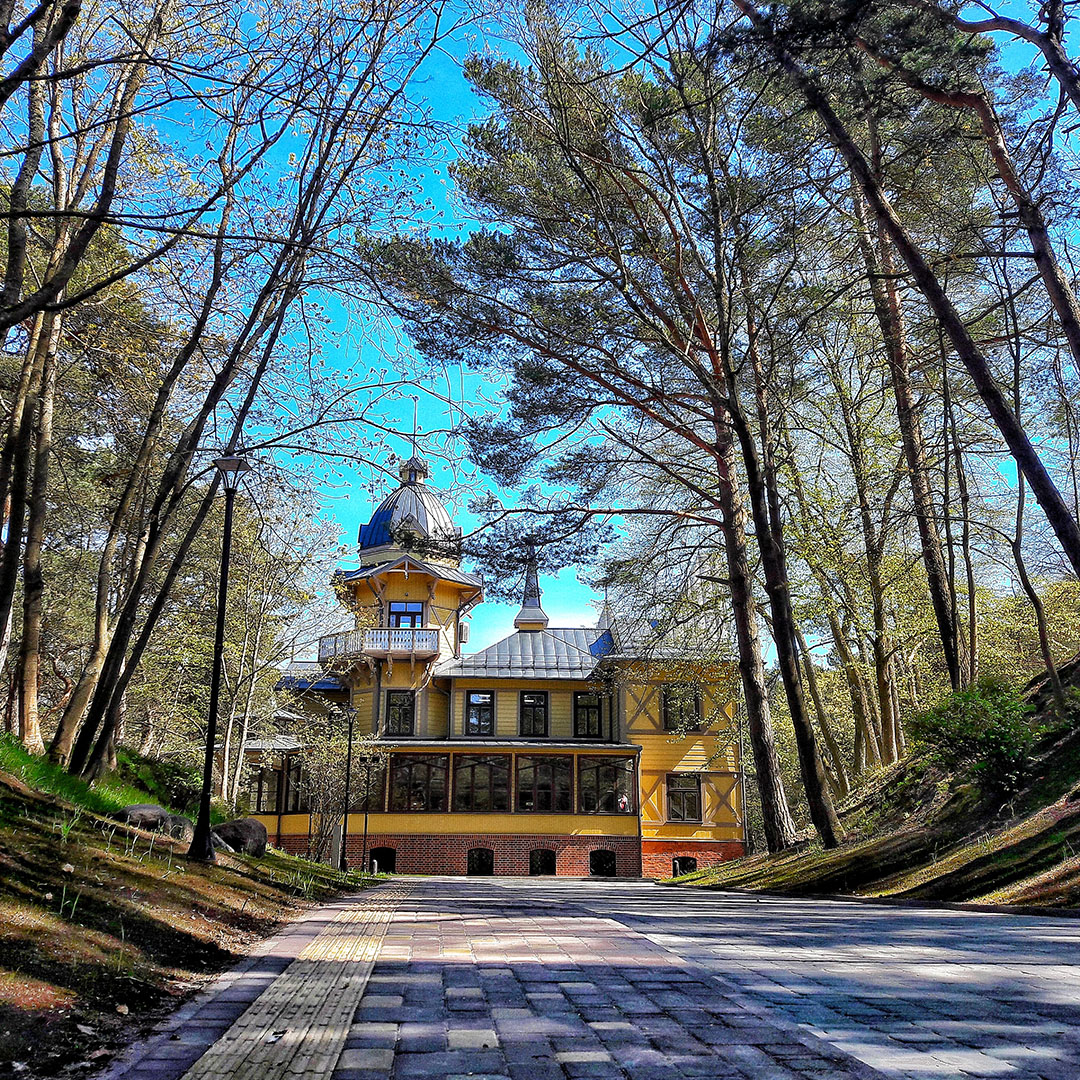 Mysterious events are also common in Radviloniai Manor which once belonged to the noble family of Radvilos of the Grand Duchy of Lithuania. Irena Rainčė, the current landlady of the manor, has quite a few stories about her encounters with Radvilos' ghosts.

“I wonder if these premises were ever consecrated, as many spirits are living here up to this day,” Mrs. Rainčė said. “Although we get along quite well, I do notice that when I lay down at night, they would sometimes come asking for something. For example, to grow a plant in the garden upside down. It took me a while to understand that the spirit meant that the plant would need to lean toward the ground rather than grow upward. And once their wishes are fulfilled, they no longer come back. I can only say I never get to feel alone.” 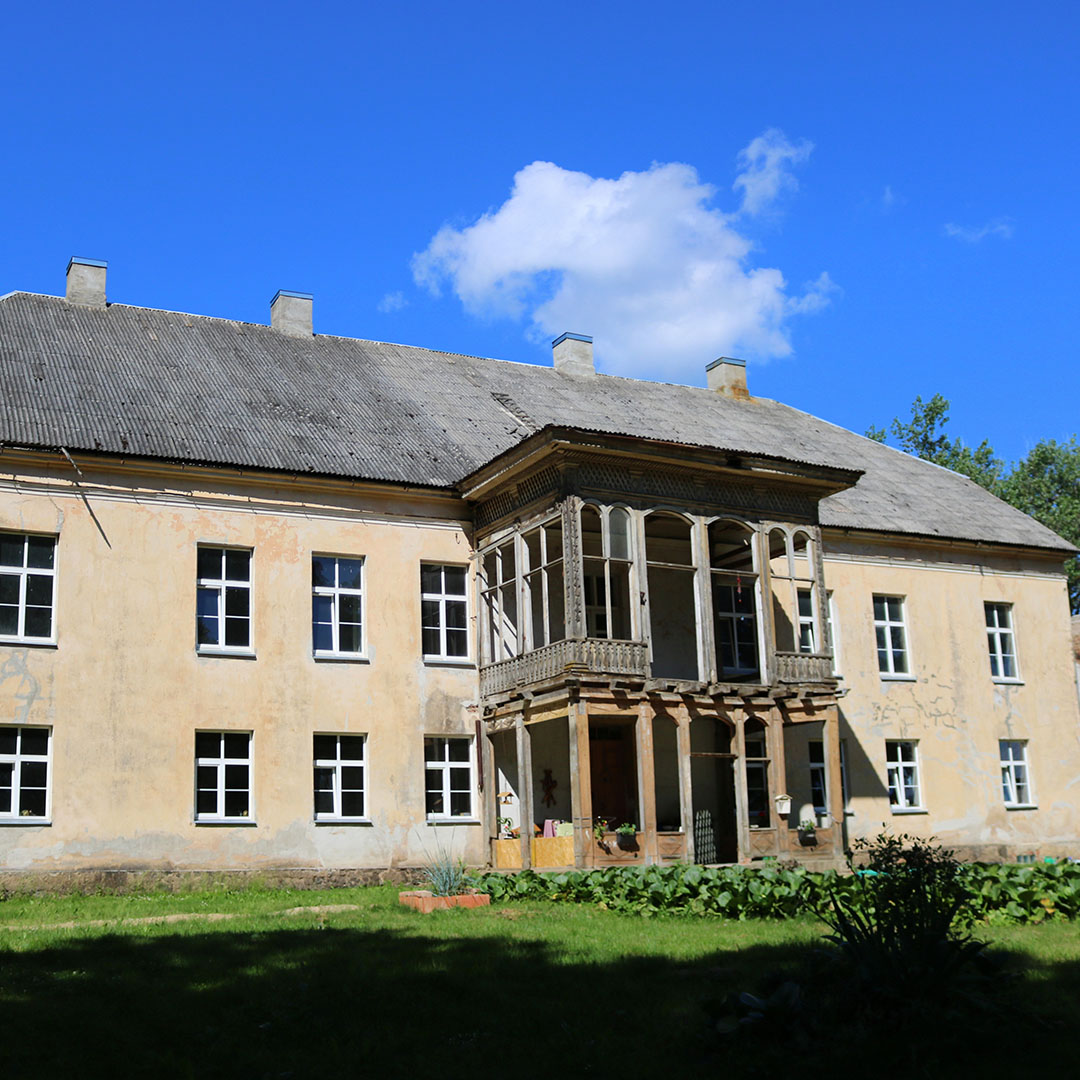 Some souls just refuse to leave

Kretinga Manor, according to the locals, is home to the ghost of Ignotas Masalskis. The Clerk of the Grand Duchy of Lithuania, the senator, the Chairman of the Educational Commission and the Bishop of Vilnius inherited 43 hectares of land and a manor back in 1769. He must have liked it so much here—planting trees and orchards, building roads, schools and houses—that his restless soul undoubtedly refuses to leave. 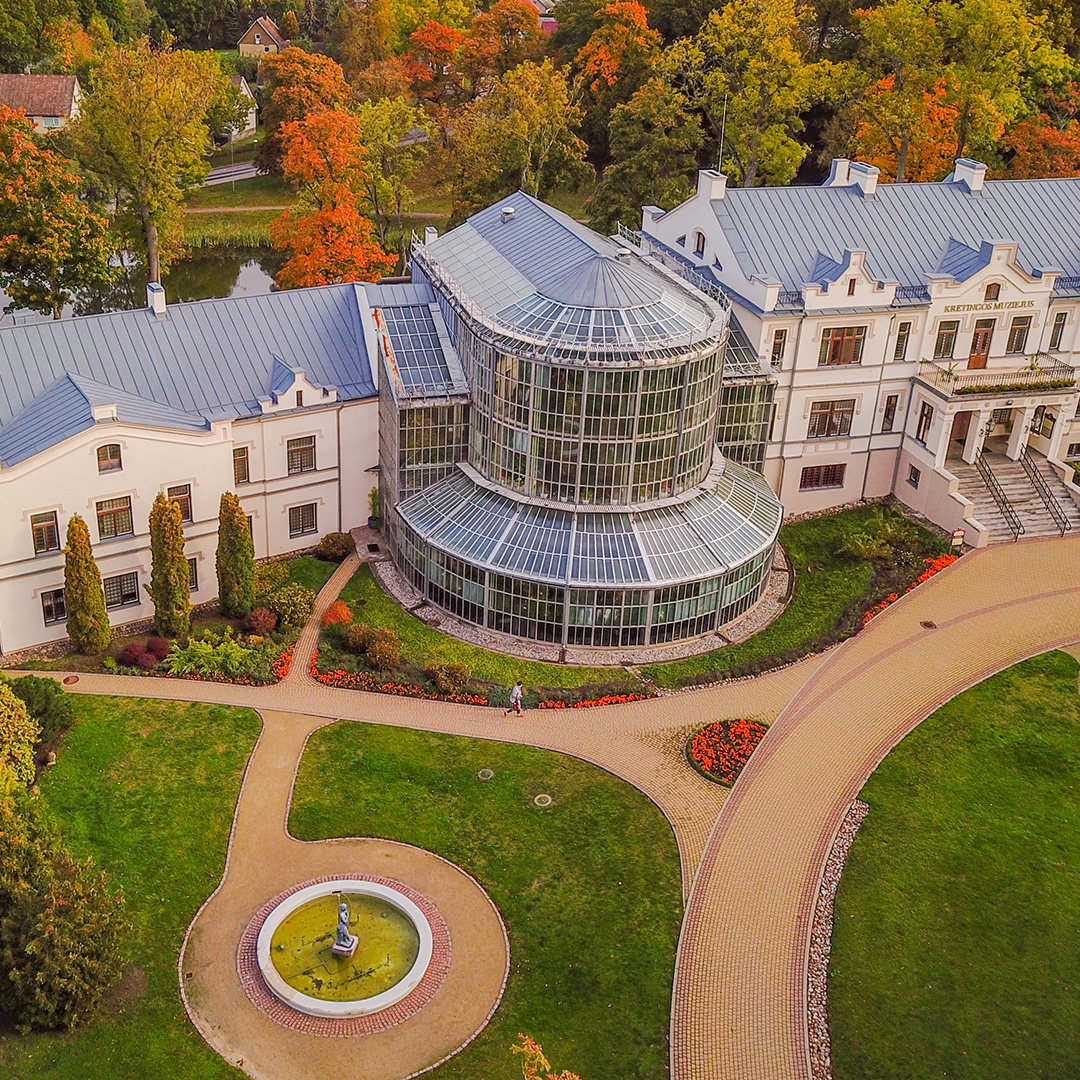 Similarly, every silent night in Rokiškis Manor House, now a regional museum, becomes the playground of the mischievous ghost of 16-year-old Jasius Pšezdzieckis, son of a well-known Rokiškis Count. In museums, the paintings must hang precisely in a straight vertical or horizontal line, however, the young count's wild nightly adventures often leave them tilted to the left or to the right.

The soul of Count Liucijonas Marikonis in Salos Manor, unfortunately, did not have any other choice but to let go of his beloved abode, thus cursing him forever. Although a real Lithuanian patriot and an educated person, ruling a manor was not in his blood—arrested for an uprising against Tsarist Russia, the formerly rich landlord had to sell Salos Manor to make a living once he was released from prison. After his death, the last descendant of Marikonis family returned to the manor as a ghost, shining in the moonlight. 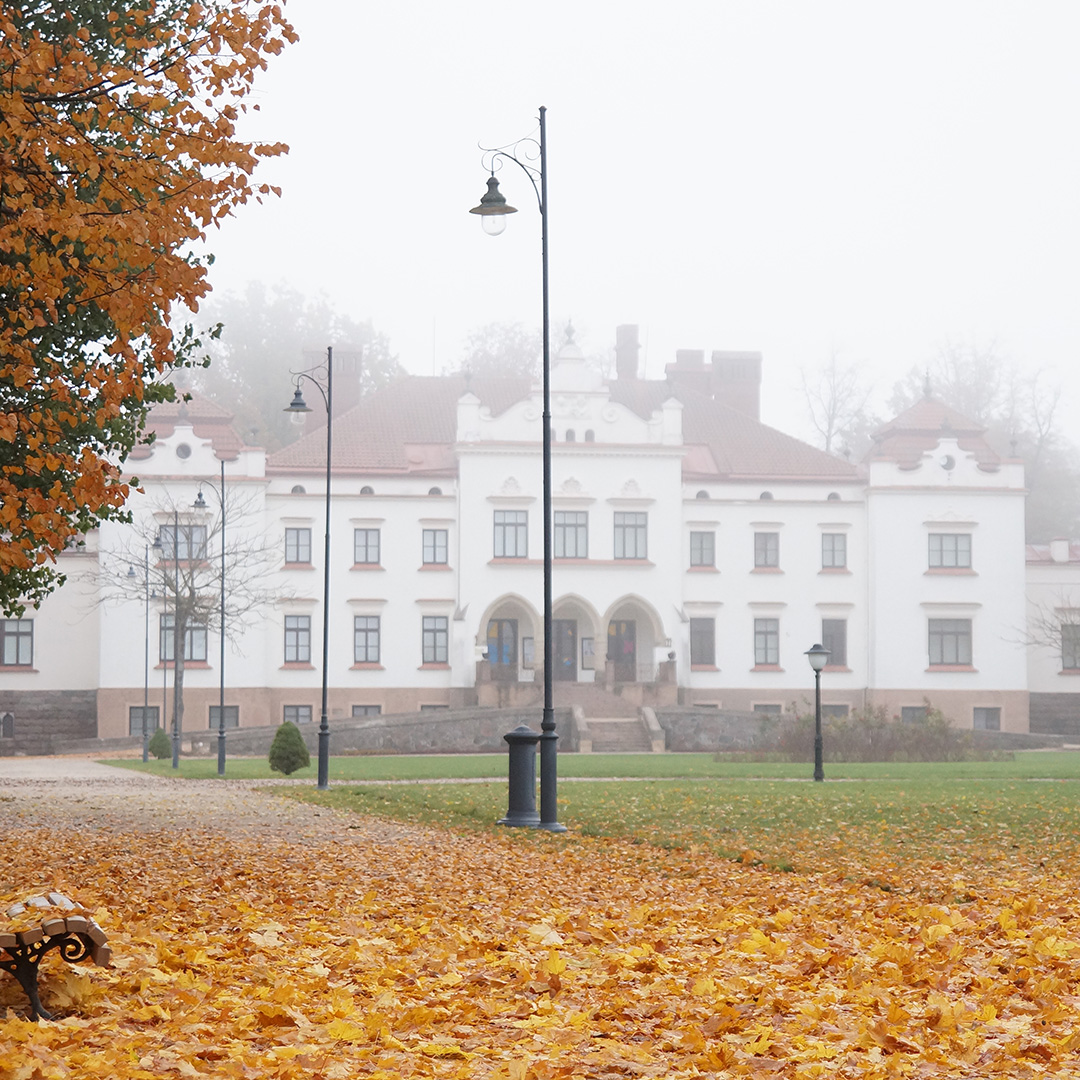 Those looking for some stronger goosebumps could give it a try at Beržėnai Manor, located in Kelmė District. Due to a lack of funding, the efforts to renovate the premises quickly ended in failure, leaving them abandoned for ghosts to haunt. Locals say that Stanislovas Gorskis, the former owner of Beržėnai Manor, once had a written letter with all the names of witches convicted to be burnt in flames on Biržė Hill. No wonder that the unpleasantly heavy mood in the area makes the visitors feel like witchy souls still roam around.

On a high bank of the river Nemunas, somewhere between Jurbarkas and Kaunas, around 60 meters long stairway made of 365 steps leads to the manor of Belvedere. Built in 1830-1840 in accordance with the example of Italian villas, the manor had been constantly destroyed for more than a decade, thus its former aura of grandeur and luxury today sets a surprisingly scary mood. Good news for the mystery-lovers, the spookiest interior of Belvedere Manor is in fact freely accessible to the general public.

These are just a few recorded stories that give every centuries-old Lithuanian castle and manor  a mystical value. However, whether to believe what is spoken, felt and supposedly seen or not is for every curious explorer to decide. Untried or inexperienced, the truth is not known.

A list of some of the most magnificent castles and manors in Lithuania can be found here.